Outside St. Cynllo’s church in Llangunllo there are these features:

(Click a link or scroll down the page to see details.)

The west tower, which houses the vestry, is a broad, three storey battlemented structure, a rebuild from 1896 by F R Kempson. The lower storey is used as a vestry and store, the middle storey was a schoolroom used for Sunday school until quite recently, and the top floor houses the bells and the remains of the old clock.

The foundation stone for the 1896 rebuild is in the southwest wall.
An old foundation stone of 1687 now forms part of a window sill in the tower vestry. It is said to have come from the south wall of the old church tower.

The porch was added in 1896. Like the tower, this was built by F.R. Kempson and donated by Jane Weyman in memory of her brother Edward Weyman J.P., who served at the Vicar’s Churchwarden for upwards of 30 years and who died at Weston on 18th August, 1895.

The east window has three stepped lancets with continuous hoodmoulding and relieving arches. 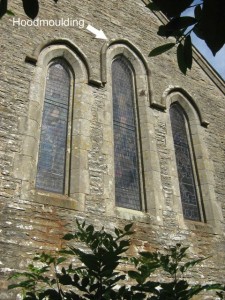 The roof tiles form a pleasing pattern visible from across the Lugg Valley.

Masonry from the medieval church has been incorporated in the Victorian re-build. The old stone here is at the base of the north wall.

Next to the east window there is a mural tablet with a coat-of-arms but no inscription.

Possibly (?) this is the same as that described by Rev Jonathan Edwards in the early 1800’s. What he saw inside at the gable end of a wall was: the coat-of-arms of Mrs Blashfield* of Treburfâ. It was inscribed “In Deo omnes confidemus”, (let us all trust in God). Her gravestone was at the east end of the chancel in the churchyard, and she had given £30 to the poor, the interest to be distributed annually by vicar and churchwardens.

*Today there is a memorial on the west wall to another Blashfield.

The Priest’s Door on the south side of the chancel, has three steps. Like the windows the design uses a pointed arch and hoodmoulding with a relieving arch.

Monuments are well spread throughout the churchyard. The earliest stones are very late 18th Century.
On the north side, which is overgrown, there are several handsome table monuments.

There are eight yew trees in the churchyard and one mature monkey puzzle tree.

A local resident on the road up to the church has trimmed his hedge to reflect the Radnorshire Dragon, which inhabits the hills around!